Surabaya, The Sparkling City is celebrating its 719th anniversary. And as an opening of its celebration, the municipality of Surabaya held a culture and flower parade which was followed by almost 70 participants this year. I was so lucky to witness the parade by myself after having a rough time with my sister since I “made” her join me (but we separated and decided to do our own things during the parade. My sister went shopping to the mall). The participants were institutions in Surabaya, from hotels, banks, schools, university, public service departments, organizations, and also other cities representatives.

I decided to wait for the participants at the entrance gate of the municipality hall. Last year I was late watching the parade and I was one among hundreds of people in the street. This year I chose a “better “ spot. But..since I’m not a pro photographer and maybe because I’m short too…so I didn’t get chance to shot the picture maximally. I wanted to take pictures near to where the city mayor sit, well at least few meters away from her, but i came too late and there were already too many people flooding the place. I wonder where will I get special permit to shoot the best moment next to the mayor side :D

Anyway, the parade was started at about 1 pm from the Governor Office near Tugu Pahlawan (The Heroes Monument) in Jalan Pahlawan. Dozens of cars ornamented with flowers and supporting participants then
moved to Jalan Gemblongan - Jalan Tunjungan - Jalan Gubernur Suryo - and finished at the municipality hall. 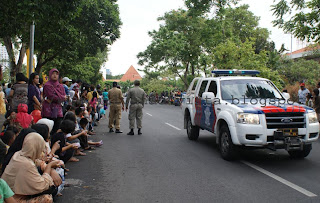 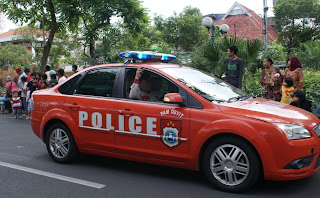 The first group was bunch of boys and girls with Indonesia flag. I even forgot if i had taken the picture. Wel..eventhough it's so silence, maybe they want people to nod their heads and salute for the flag, but hell yes for an opening the flag is a must!!! 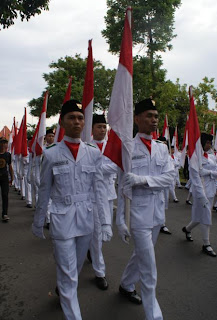 And next the  is my favorite! The cadets of the Naval Academy. I have visited the Naval Academy 2 years ago. I went there for a field trip with the students. The Naval Academy is famous of its superb marching band. I was so thrilled when i found out that they were the opening act. I don't know why but my hands were shaky when I shot them. Maybe the loud sounds of the drums and cymbals not, mentioning the cool cadets, made me nervous.
Anyway I missed their performance for the city mayor. I couldn't have good spot to see their performance. The marching band usually perform for big events like the national sports competition and other national events. I admire the marching band. I'm a fan 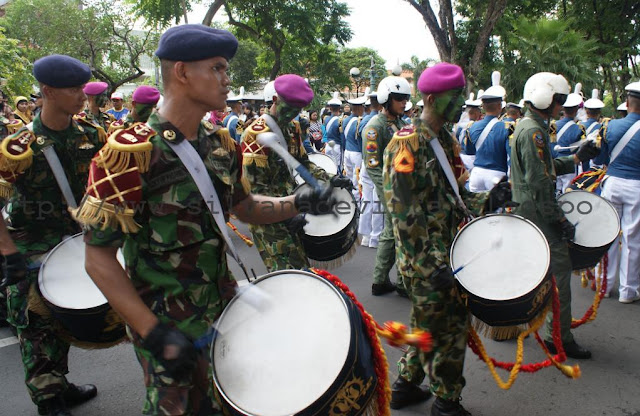 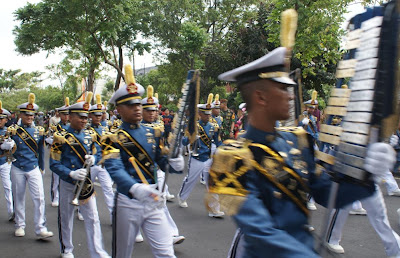 And after the cadets next was Mr and Mrs Surabaya - Cak and Ning. Every year Surabaya youths joined the Cak dan Ning competition. They are the city representative. They usually show up in a cultural events like this one. 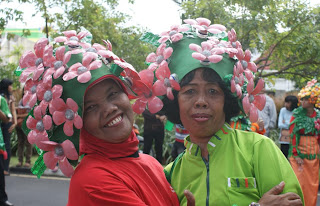 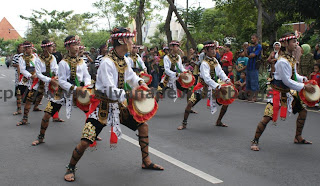 There are also some schools, universities, and also other educational institutions that joined the parade. I'm so proud as the alumni of Airlangga University since they had a nice decorated car. It was decorated like the ancient Javanese king's cart. And the most interesting part was when they had two foreign students one is from Netherlands, the other one is i'm not sure where she's from. Interesting. Check these ones out!