Silvana Devinta - February 13, 2012
I was so happy when I received a unique postcard from Yu, she lives in Yunnan a province in southwest China. She sent me a very nice postcard own in with a picture of Lijiang Old Town in Yunnan.  This old town was registered on the UNESCO World Heritage List on December 4, 1997. And since it became a UNESCO World Heritage site, more and more tourist flooding the town. Here cars are not allowed. So visitors walk on the cobblestone streets. 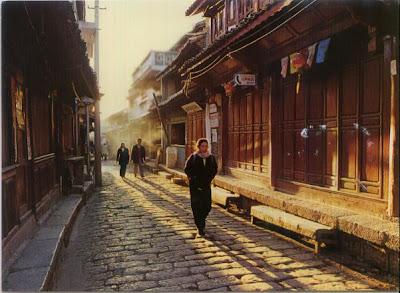 Here’s more detail story about the city which copied from UNESCO World Heritage Convention site http://whc.unesco.org/en/list/811
Lijiang is an exceptional ancient town set in a dramatic landscape which represents the harmonious fusion of
different cultural traditions to produce an urban landscape of outstanding quality.
In the 13th century AD, during the later Southern Song dynasty, the ancestors of the ruling Mu family moved their main centre from Baisha to the foot of the Shizi Mountains to a new town known as Dayechang (later Dayan), where they began building houses surrounded by a city wall and moat. After Azong Aliang submitted in the 1250s to the authority of the Yuan Emperor Hubilie, Dayechang became an administrative centre. The Lijiang Junmin prefecture was established when the region came under Ming rule in 1382.
In 1724 the first non-native prefect began building prefectural offices, barracks and educational facilities at the foot of the Jinhong Mountain. Lijiang County was created as part of Lijiang Junmin Prefecture in 1770. The old town of Lijiang is built on a mountain slope running from north-west to south-east, facing a deep river.
The northern part of the city was a commercial district. The main streets in this part of the old town radiate from the broad street known as Sifangjie, which has traditionally been the commercial and trading centre of the north-western part of Yunnan Province. On the west side of the Sifangjie is the imposing three-storeyed Kegongfang (Imperial Examination Archway), which is flanked by the Western and Central rivers.
A sluice on the former uses the different levels of the two waterways to wash the streets, a unique form of municipal sanitation. The streets are paved with slabs of a fine-grained red breccia. Water flows from here to the Shuangshi Bridge, where it branches into three tributaries. These subdivide into a network of channels and culverts to supply every house in the town. This water supply is supplemented by many springs and wells within the town itself. A system of watercourses of this complexity necessitates a large number of bridges of varying sizes. There are 354 bridges altogether; they take several forms. It is from these structures that Lijiang derives its name, the 'City of Bridges'. The feature of Lijiang that is most representative of the Naxi minority culture is its wealth of domestic dwellings. The basic timber-framed structure developed into a unique architectural style with the absorption of elements of Han and Zang architecture. Most of the houses are two-storeyed. The chuandoushi wooden frames are walled with adobe on the ground floor and planks on the upper floors; the walls have stone foundation courses. The exteriors of the walls are plastered and lime-washed, and there are often brick panels at the corners. The houses have tiled roofs and an external corridor or veranda.
Special attention is paid to the decoration of the houses, especially in the arches over gateways, the screen walls, the external corridors, the doors and windows, the courtyards and the roof beams. Wooden elements are elaborately carved with domestic and cultural elements - pottery, musical instruments, flowers, birds, etc. - and gate arches take several elegant forms.
The Lijiang Junmin Prefectural Government Office and Mujia Compound were established in 1368, during the Ming dynasty, in the eastern part of the city. The 286 m long government office was a complex of halls, towers, bridges, terraces, pavilions and palaces. To the north was the official residence, known as the Mujia Compound. It was largely destroyed by war during the Qing dynasty and only the Yizi Pavilion, the Guagbi Tower, and a stone archway survive. The group known as the Yuquan architectural structures is in the Heilongtan Park and date from the Ming and Qing dynasties. Most notable is the Wufeng Tower (1601), moved from the Fugue Temple, of which it formed part, and now designated as one of the major historical sites in Yunnan Province. In addition to the Dayan old town, established in the Ming dynasty, the earlier Baisha quarter, the centre during the preceding Song and Yuan dynasties, survives 8 km to the north.
Another special thing from Yu postcard is the ginkgo leaves. I’ve heard about this in a shampoo commercial on TV but I’ve never seen one for real. Thank you so much Yu for showing me the leaves.  It seems that there are many ginkgo leaves in Yu’s neighborhood. 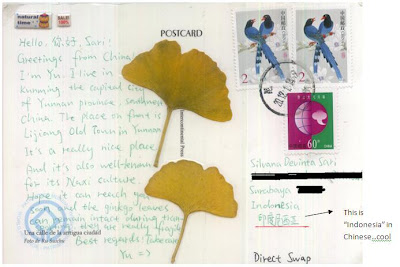 According to Wikipedia, Ginkgos are large trees, normally reaching a height of 20–35 m (66–115 feet), with some specimens in China being over 50 m (164 feet). Surprisingly Ginkgo is believed to be a very primitive plant. Ginkgo is a living fossil according to http://www.backyardnature.net/ginkgo.htm. here you can read more about the leaves.
Thank you so much Yu for the postcard.