Silvana Devinta - January 17, 2012
Last Sunday I went to the Arabic Neighborhood (Kampung Arab) Ampel in the north of Surabaya. I actually wanted to try Indian food as mentioned by a friend in from blog, Mbak Tantri. As she suggested I had to go to Ampel and walk through the small alleys.
I’ve checked on my google map to find about the restaurant location, at Jalan Sasak 15 Surabaya.  I went to my sister’s place first by bemo, then we went to Jembatan Merah Plaza. This shopping centre is located near the legendary Red Bridge. We could reach the neighborhood by becak for aout 7 to 10 thousand for two persons. But, since it’s Sunday morning and I was on my adventure mood I decided to walk and enjoy the old city of Surabaya.
I passed Jalan Panggung, after the Red Bridge. Along this one way street I could find old abandoned houses. They’re in the art-deco style, just like Dutch and Chinese houses in the past. Most of the houses were left empty and unwell managed. After walking for less than 10 minutes I smelled fishy disgusting smell. It’s the fish market, Pasar Pabean. It was 10 in the morning and the the market is still close. I and my sister kept walking along the small street. There were some men in sarongs, maybe they’re students in madrasah (Islamic School in Ampel area).  The Arabic area is famous of its Islamic tradition, custom, and also the Sunan Ampel mosque and grave. Sunan is a great Islam teacher and he spread Islam in the ancient time in Java.
At the end of Jalan Panggung, I found T-junction of Jalan Sasak, the place where I should head to, and big street of Jalan K.H Mas Mansyur. I crossed the street while keep refusing many becak drivers who offered us to take their becak.  Jalan Sasak is just like Jalan Panggung. A small narrow street. I passed many Islamic books and holy Qur’an sellers. I also passed some Arab perfume sellers. Along the street I met many Arabic. They’re not native Arabic, they’re the generations who were born and raised in the city, Surabaya.
Right in the street bend, I found an old green ornamented cement gate. It is the gate to the Sunan Ampel Mosque area. I passed and kept walking to find the restaurant. Unfortunately it was close. I called the Indian restaurant owner, since he put his mobile phone number on the billboard, and he said the chef was sick. So…in a big grief I walked to the mosque area.
After entering the main gate,  I actually entering the market zone. There were many shops which sells Arabic clothes, food, nuts, accessories, etc. Then I remembered my student who told me about a place to make temporary tattoo using hena. Hena is a natural ink which can be applied in our skin or hair. It last for 2-3 weeks after applied.  I walked slowly and try to find the shop. The shop name is “Amir Hamzah”. It’s not specialized in temporary hena tattoo making, but it’s a shop which sells sarong, kopyah (cap), sajadah (praying mat),  arabic tea set, dates, and other Arabic souvenirs.
It’s written in the poster that they have Mahendi (the hena tattoo) artist. It opens from 9 a.m to 8 p.m. But it’s for ladies only. I searched on nice pattern for my hands. It’s cheap. This is the best news :D. Most pattern costs 10,000 rupiah only. Years ago when I was in Jogja I should pay for 35,000 rupiah for a very simple tattoo. I regret  this a lot!
Anyway, here’s my tattoo and the making process. The lady, the artist, is so skillful in applying hena. She copied the pattern based on what I chose from the pattern album. And within less than 10 minutes I got my both hands beautifully painted by her. The result? Beautiful tattoos. Should come here again when mine has faded away. 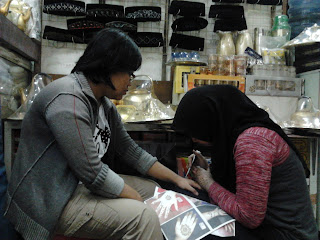 Applying hena - the ink to my hand 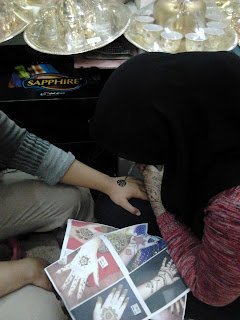